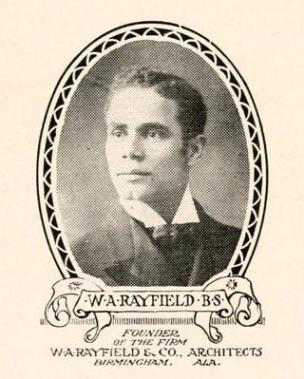 Born in Macon, Georgia in 1873, Wallace Augustus Rayfield was the second academically trained African American architect. His most familiar design is Birmingham’s 16th Street Baptist Church. The church was the site of the 1963 bomb blast that killed four young girls. Many of the places of worship Rayfield designed in the South were rallying locations during the Civil Rights Movement. He designed hundreds of structures throughout the South prior to the Great Depression. Today, around the country, many of the buildings Rayfield designed are still standing.

The discovery of Rayfield’s legacy began in the fall of 1993 when Allen Durough, a white, Baptist preacher was demolishing an old barn on his property in Bessemer, Alabama. Durough inspected the barn before the demolition began and found 411 printing plates belonging to Rayfield. Over the last 25 years, Durough has painstakingly researched Rayfield and attempted to find a permanent home for the plates and his information. In 2010, he published The Architectural Legacy of Wallace A. Rayfield. Sadly, Durough is not willing to give the material to any museum or university. Although, he is 75 years old, disabled, and his health is rapidly declining.